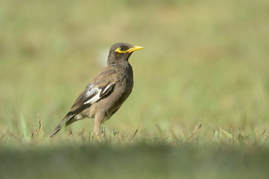 A comparative study of invasive and native populations of the Common Myna
​
The Common Myna (Acridotheres tristis) is an invasive species native to south-east Asia and the Indian subcontinent, which has invaded large parts of the world. Our research aims to compare behavioral, genomic and morphological traits between common mynas in different invasive stages. This project is a broad collaborative effort that includes researchers from several institutes across the globe to study these questions in a recent invasion (Israel), an old invasion (Australia) and the native range (India). We are interested in the global distribution of the species and study the factors that influence it, chiefly anthropogenic factors , as well as behavioral traits that may be correlated with first invaders in invasion fronts. 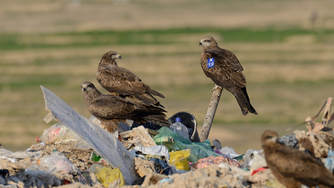 The movement ecology of over-wintering Black Kites (Milvus migrans) in the Northern Negev, Israel with implications on aircraft collision risks

Landfills attract and are exploited by birds, serving as a reliable food source for many species. When these landfills are within close proximity to airports, the birds can be a hazard to aircrafts and their crews. In Israel, among the most prevalent species visiting landfills is the Black Kite (Milvus migrans). The Black Kite is a medium-sized raptor that winters in Israel in large numbers throughout the country. Its wintering population in Israel has increased from a few thousand to more than 30,000 in the northern Negev alone over the course of the past two decades. The Ganei-Hadas and Dudaim landfills, located 10 kilometers from the Israeli Air Force’s (IAF) Hatzerim Airbase, attract the highest number of Black Kites. Apart from these landfills, Black Kites also feed in open fields and inside the airbase. The aim of this research was to understand the black kite’s movement patterns and habitat choices. During this study, we captured 89 individuals with a cannon net and attached transmitters that provided us location and acceleration of each individual every 5 to 10 minutes. This study first to show the main activity regions of Black Kites during the winter in the Northern Negev, allowing us to provide winter flight recommendations to the IAF. Our research emphasizes the value of understanding bird movement ecology, in our case enabling a safer and lower-risk sharing of air space for aircrafts, flight crews and wildlife. 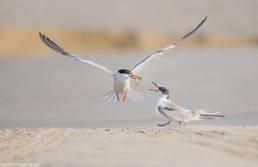 The Little and Common terns (Sternula albifrons and Sterna hirundo), are migratory seabirds breeding in Israel. Ground-nesting colonial seabirds, such as terns, are highly vulnerable to human disturbance at breeding sites and increased predation by invasive species. Habitat loss and fragmentation may force terns to breed in higher densities or in suboptimal breeding sites, with increased predation risk. The Little and Common terns are both listed as endangered species in Israel, with deterioration in their conservation status during 2017, due to large reduction in distribution range and their dependence on active site management. The breeding populations are small and concentrated in few breeding colonies, therefore their breeding status in Israel is at risk. Our research uses long-term data collection and monitoring of those populations, as part of a bigger, long-term conservation project, aiming to preserve and enlarge the breeding population of terns in Israel, create more breeding sites and understand the risk factors limiting its population size. We are studying the breeding biology and survival of both tern species across breeding sites, and the factors influencing reproductive success. We aim to identify the main predators, and subsequently to reduce predation and improve breeding success. We also study the feeding ecology of the breeding terns, by characterizing the type and availability of prey items, the difference in diet among breeding sites and across years, and its influence on reproductive success. By exploring the movement range of the breeding terns, we strive to conserve a larger network of breeding sites. 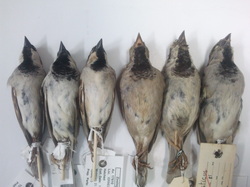 The House Sparrow (Passer domesticus) is one of the world’s most widespread bird species. House sparrows are native to Israel. However, in addition to the local subspecies (P. d. biblicus), in the Southern part of Israel there are populations that resemble the Oriental subspecies (P. d. indicus). These populations could be a result of an indirect introduction to the area by ships from the Red Sea. In order to investigate the origins of this population and the relationships among other house sparrow populations, we are working on morphological and genetic characterization of this population and other populations in Israel.
Genetic Basis and plasticity of traits related to invasiveness (future project)

In collaboration with Prof. Lynn Martin (University of South Florida) and Prof. Aaron Schrey (Armstrong Atlantic State University) we will be investigating the genetic basis and plasticity of behavioral and physiological traits related to invasiveness in the house sparrow. House sparrow is one of the world’s most successful avian invaders and as such provides the perfect candidate for studying the mechanisms related to successful invasiveness. Specifically, we are interested in the role and contribution of genetic variation and phenotypic plasticity for generating successful invaders. 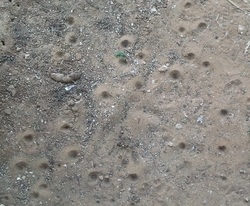 Wormlions are flies (Diptera), of which the larvae build pit traps in order to catch their prey (similarly to pit-building antlions). Despite their abundance, very little is known about their ecology and behavior. In collaboration with Dr. Inon Scharf (Tel Aviv University), we are trying to understand the factors that determine pit building behavior (i.e, body size, hunger) and pit density in their natural habitat and in the lab. 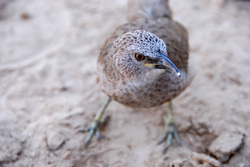 In some social animals, members of a social group help the breeding pair in providing care for their offspring. The Arabian Babbler (Turdoides squamiceps) is a cooperatively breeding species in which offspring usually remain in the group and help their parents raise their offspring. In collaboration with Oded Keynan (Director of the Arava Bird Watching Center, Dead Sea & Arava Science Center), we are investigating the relationship between population genetic structure and group dynamics in order to examine reproductive success of individuals with different breeding strategies, patterns of dispersal and changes over time in relatedness and inbreeding.